20 October 1925 With a large lifting windwheel mounted in a horizontal position above the fuselage, the machine can hover and descend vertically

Claims that it will not stall and can land on a platform erected above the buildings in a city are made for a new type of aeroplane which gave a demonstration before Great Britain’s flying experts at the Royal Aircraft establishment, Farnborough, yesterday.

Called by its inventor, who is a Spaniard, the Autogiro, it works on an entirely new principle. The usual wings of an aeroplane are substituted by a large lifting air screw or windwheel mounted in a horizontal position above the fuselage, and free to rotate on its own mounting. Each of the four blades of this screw is hinged on to its base, and so is able to move up and down within a limited space. No power is applied to this screw, which is kept revolving by the air movement set up by the forward motion of the machine.

Yesterday’s demonstration was carried out on an Avro fuselage, the machine being piloted by Captain F. C. Courtney, the Farnborough test pilot. First the engine driving the tractor screw which sends the machine forward was started, and then a rope wound round the mounting of the lifting screw was held on by half a dozen men, thus setting it in motion. The pilot then took off in the usual way, and after reaching a moderate height carried out a number of evolutions. First he throttled down his engine until his machine lost all flying speed, but instead of stalling, as an ordinary plane would do, it dropped slowly towards the ground. Captain Courtney was able to fly at a speed as low as 20 miles an hour without losing height at all, while with the engine “all out” he attained the maximum speed of an ordinary Avro aeroplane.

Landing in the usual fashion the run necessary after touching the ground was very much lees than that required by the aeroplane. More spectacular was a “flat” – a landing made from a height of a dozen feet with engine switched off. In this case the machine descended vertically, and came to earth with so little shock that the Avro landing carriage was undamaged.

The inventor’s Claims
Explaining his machine Señor de la Cierva, the inventor, said when the machine was in motion the four blades of the lifting screw flapped like the wings of a bird. If applied to commercial purposes the machine fitted with his device would carry as much weight and have a speed at least equal to that of an ordinary aeroplane, while for military observation purposes, the machine being able to hover, would be a great improvement on the ordinary type. His invention would enable an aeroplane to “land” on the deck of a ship, and with it it would be quite possible to carry mails right to the centre of the city and land them on a platform erected above the houses.

Captain Courtney said after the tests that the new type of machine was much easier to fly than the old type. No delicacy of touch was needed to keep the machine balanced. “All the pilot has to do,” he said, “is to steer the machine in an up or down direction with his horizontal tail-planes, and to right or left with his vertical tail-planes. Above all, the machine cannot stall, and if reverse gear were fitted she would fly backwards as easily as she does forward.”

To-day the Autogiro is to be flown by Squadron Leader Haig. The machine has been brought over from Spain at the instance of the Air Ministry. Many of the air experts present considered it likely that the machine will completely revolutionise civil aviation. 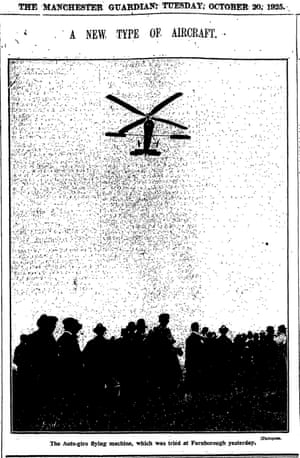